TOBIAS CHURTON IS BACK!

January 2022 sees the publication of Aleister Crowley in England, Tobias’s penultimate work in his detailed, definitive multi-volume Crowley biography. Fast, furious, and fiery, it details the last fifteen years of Crowley’s never-dull life, chock-full of adventure and surprise. Covering the 1930s and the war and post-war years, Aleister Crowley in England is highly evocative of a time few who don’t remember it personally would wish to have witnessed close-up. Readers may now recollect at leisure what it took to survive the prospect of imminent destruction of life and freedom. Crowley’s attempts to keep on top of his Californian followers provides a touching, and hilarious, leitmotiv to the work: a symphony of sin, or dare one say: “sinsight”.


AND WILL BE BACK AGAIN!

Tobias had considered Aleister Crowley in England his last Crowley biography, that is, until Paris-based Thomas Jamet asked why he hadn’t done Aleister Crowley in Paris. A moment’s consideration brought the at-first irritating realisation that Crowley’s relationship with Paris was lifelong, critical, and hardly examined in depth. Indeed, it was largely uncharted territory. Like it or not, Tobias had to cover it, and so has recently completed what will (in January 2023) become the next, and final instalment of the six-volume Crowley epic. The wonderful Richard Burton once described Crowley as “idiotic.” Tobias believes there’s much in Crowley’s alleged idiocy we might gain from, should we open our tired minds to the light. Happy reading!

Tobias has just received his twenty-sixth book commission, but you’ll forgive him for keeping its exciting subject under his hat, for the time being. In the meantime, there will be plenty for all to enjoy, while Tobias continues to seek backing for his eight-part costume drama based in-part on his acclaimed book, Occult Paris. Who today has the guts to take on Tobias’s unique re-creation of lost times and unjustly forgotten people—BELLE ÉPOQUE?


Tobias Churton’s work continues to show that the spiritual history of humankind is not something we are likely to find amid the 24 hour news-barrage to which humanity is now subjected. Likewise, we should reflect that the apparently permanent threat of “apocalypse” doled out eagerly to the general public does not necessarily have command of the future. The wail of “Chicken Licken” today is the cry of the sheep-like journalist, manipulated by the worldly glitter of the Old Enemy and misplaced loyalties. Either the sky has fallen, or is about to fall; so we hear. Our fears often reflect our spiritual state. Tobias Churton will, against the tide, continue to assert, even in the wilderness, along with many others, in and out of our time, that spiritual vision is sole anchor in the tempest of fear, the light in the darkness, the hope amid the despair: key to all wisdom, whose price is far above what the richest might offer, or could ever offer, unless that is, they found their heart, and offered it freely. That would be a rare and precious thing, and unlikely to gain publicity, but it would make all the difference. 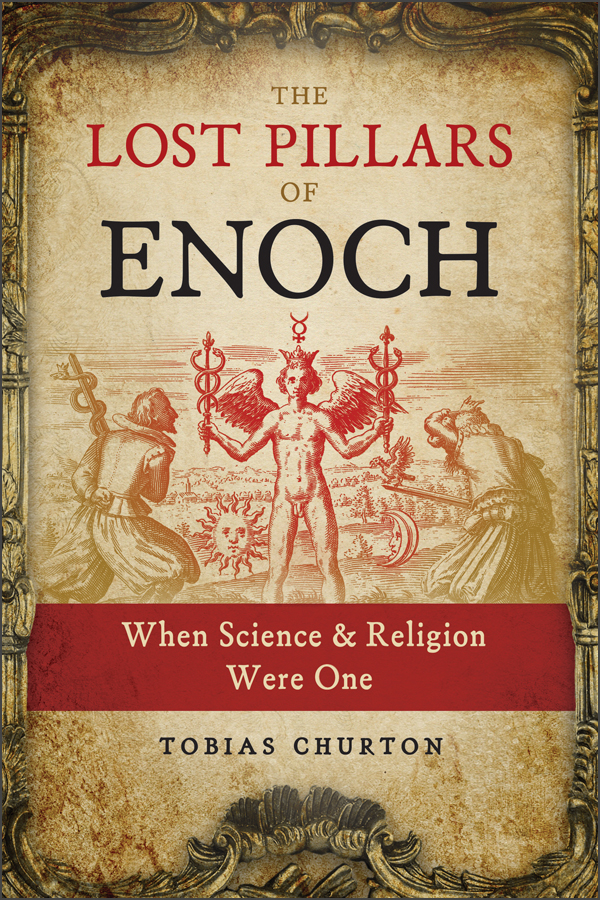 January 2021 saw the publication of Tobias Churton’s twenty-third book, THE LOST PILLARS OF ENOCH: When Science and Religion were One. The pillars of legend were erected to preserve the knowledge of humanity from the effects of a coming cataclysm (the Flood). The timing of this book seems uncannily appropriate given current disquiets in many parts of the world. The book stands as a kind of summa of Tobias’s previous work in engaging readers with the history of esoteric thought and spirituality, uniting the earliest traces of civilized humanity with its long journey to our present time. He lays out a possible religious future for humanity based on all that has been learned of the Hermetic tradition. The publishers, INNER TRADITIONS INTERNATIONAL of Vermont, put it like this:


THE LOST PILLARS OF ENOCH...

• Explores the unified science-religion of early humanity and the impact of Hermetic philosophy on religion and spirituality.

• Investigates the Jewish and Egyptian origins of Josephus’s famous story that Seth’s descendants inscribed knowledge on two pillars to save it from global catastrophe.

Esoteric tradition has long maintained that at the dawn of human civilization there existed a unified science-religion, a spiritual grasp of the universe and our place in it. The biblical Enoch - also known as Hermes Trismegistus, Thoth, or Idris - was seen as the guardian of this sacred knowledge, which was inscribed on pillars known as Enoch’s or Seth’s pillars.

Examining the idea of the lost pillars of pure knowledge, the sacred science behind Hermetic philosophy, Tobias Churton investigates the controversial Jewish and Egyptian origins of Josephus’s famous story regarding the function of the two pillars as a data repository designed to survive a global catastrophe. He traces the fragments of this sacred knowledge as it descended through the ages into initiated circles, influencing civilization through Hermetic, Gnostic, Kabbalistic, Masonic, Hindu, and Islamic mystical knowledge. He follows the path of the pillars’ fragments through Egyptian alchemy and the Gnostic Sethites, the Kabbalah, and medieval mystic Ramon Llull. He explores the arrival of the Hermetic manuscripts in Renaissance Florence, the philosophy of Copernicus, Pico della Mirandola, Giordano Bruno, and the origins of Freemasonry, including the “revival” of Enoch in Masonry’s Scottish Rite. He reveals the centrality of primal knowledge to Isaac Newton, William Stukeley, John Dee, and William Blake, resurfacing as the tradition of Martinism, Theosophy, and Thelema. Churton also unravels what Josephus meant when he asserted one Sethite pillar still stood in the “Seiriadic” land: land of Sirius worshippers.

Showing how the lost pillars stand as a twenty-first century symbol for reattaining our heritage, Churton ultimately reveals how the esoteric strands of all religions unite in a gnosis that could offer a basis for reuniting religion and science.

Obviously, this has been a difficult year for everybody and Tobias would not wish to add his own share of woes to the general sense of apprehension and frustration. He’s been working hard on his new, detailed biographical work on Aleister Crowley. ALEISTER CROWLEY IN ENGLAND – THE RETURN OF THE GREAT BEAST covers Crowley’s life from his return to England from Berlin in 1932, and takes us through the pre-war years, World War Two, and his last retirement in Hastings to his death in December 1947. A sumptuous work, it will be published towards the end of 2021 by Inner Traditions.

Tobias Churton has also found the time to write a full-length movie script and is currently engaged on a dramatic historical series with a strong magical theme and much contemporary resonance. 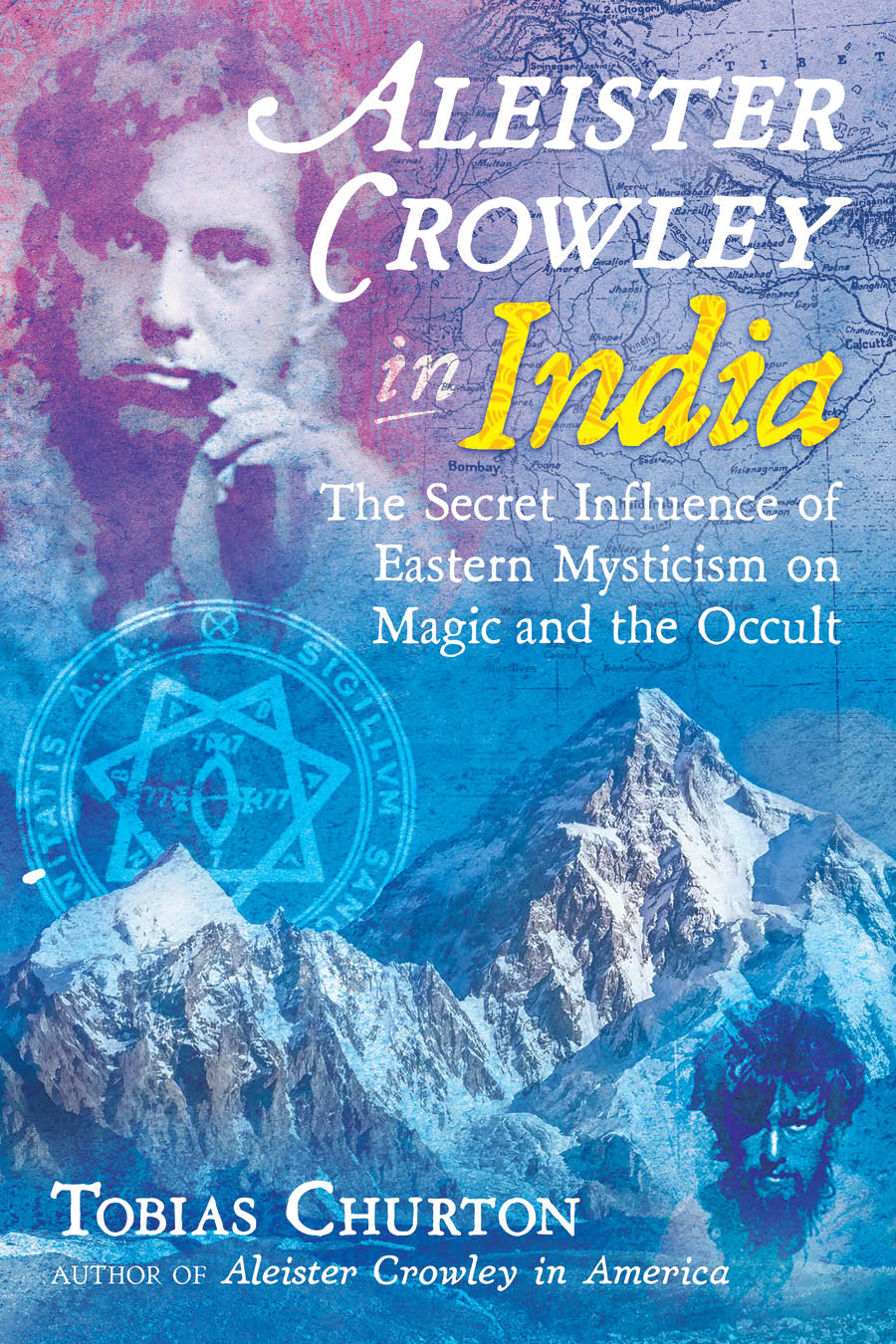 Tobias’s epic account of Indian Mysticism, Aleister Crowley in India, was published in January 2020. It brought together Churton’s research into Crowley’s critical involvement with India 1901-1905, and the enormous impact that experience had on his life and spiritual teachings until his death in 1947. Written in two parts: CROWLEY IN INDIA and INDIA in CROWLEY, the book not only gives the fullest possible account of everything Crowley acquired from Allan Bennett, Theosophy, Vedanta and Buddhism in India and Sri Lanka but its fresh research, employing much previously unpublished material, fills in many gaps in our knowledge of this critical transition period in spirituality, and corrects a great many errors of understanding in recondite subjects that have long lain obscure or confused by superficial and ill-informed commentary and public hearsay. A book to delight and astonish, copiously illustrated with rare and compelling photographs, including the fullest accounts yet of Crowley’s expeditions to K2 and Kangchenjunga, and the Beast’s march to Samadhi and beyond, the book also contains detailed analysis of Crowley’s often underestimated poetry and metaphysical essays written before preoccupation with the Cairo revelation.

A book for everyone interested in the real Aleister Crowley, and a must for any person concerned with Yoga or who is planning a visit to India today, it will help the discerning to sort out the often confusing strands of Hindu and Buddhist traditions. The book also contains new research exposing a hitherto unrecognised mystery regarding Kenneth Grant’s interpretation of David Curwen’s experience of Tantric doctrines that vindicates Crowley’s confidence in his own position towards the end of his magical life. 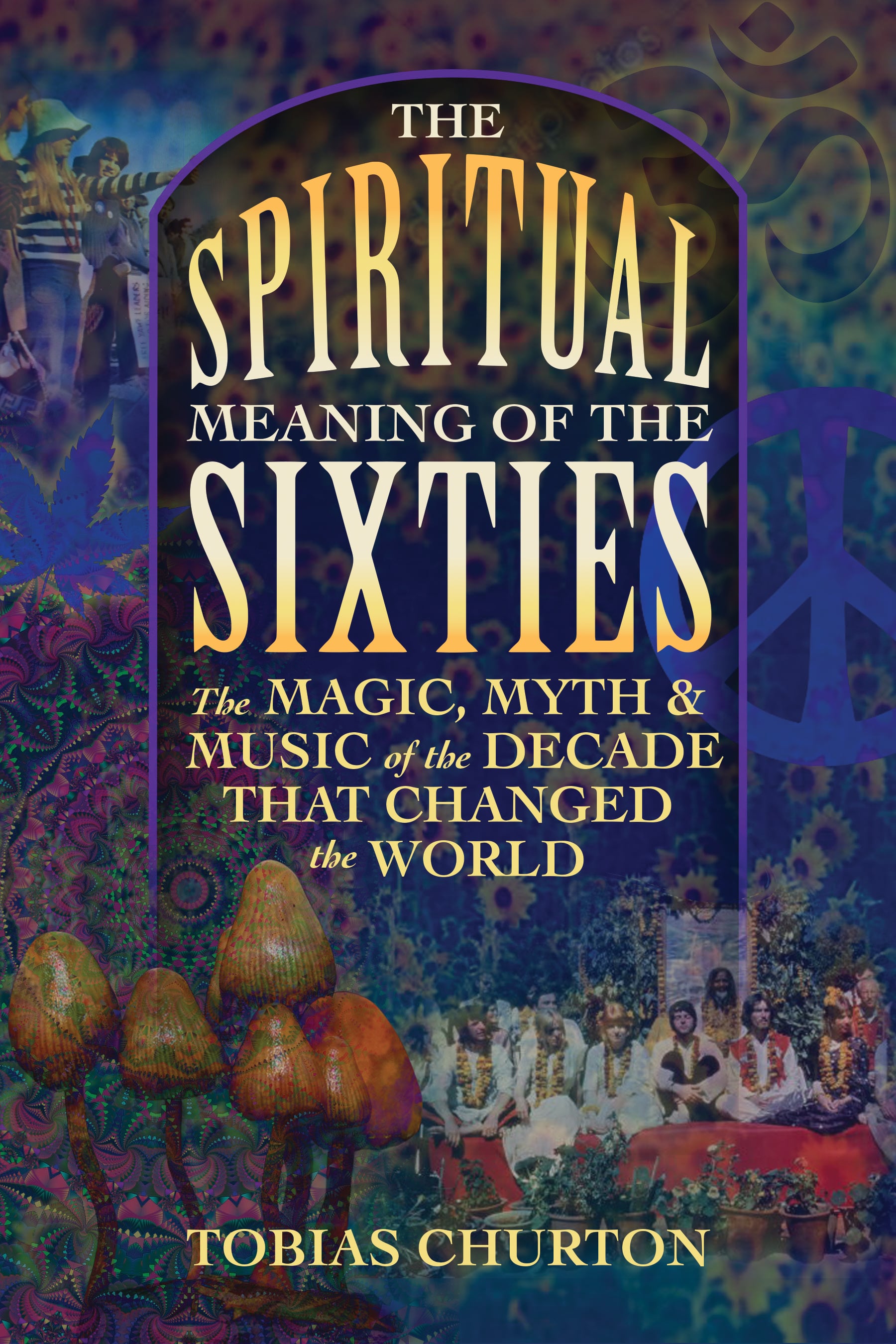 November 2018 saw Inner Tradition's publication of THE SPIRITUAL MEANING OF THE SIXTIES The Magic, Myth & Music of the Decade that Changed the World. A compelling text investigating the spiritual meaning of a great many aspects of the Sixties, from education to politics, from fashion to the plastics industry, from the Space Race to the world of Cinema, from film and jazz music to Jimi Hendrix, student radicalism, robotics, Theology, Civil Rights, fear of nuclear war, Art and Advertising, Television and Pop Culture, philosophy and Indian Religion, Psychedelics and Movie Stars, and much else. The book does precisely what it says in the title and—make no mistake—thisis the book that gets to the essence of a question asked by so many people.What really was it that made the Sixties so special?Tobias has written with his daughter’s generation in mind, and for future generations only too likely to be “sold a turkey” as to what “the Sixties” really involved. The book is without doubt the most personal and direct Tobias has ever written, with much taken from his own experience, while the copiously illustrated text never departs from the book’s essential focus: the challenging question of the decade’s spiritual meaning.

Much of the book’s appeal probably comes from the level of personal input from the author. As part of the process of writing, Tobias Churton returned to Australia as guest of old school friend, Mark Bennett, to revisit many places familiar to him when the Churton family travelled as immigrants to the states of Queensland and Victoria in 1966-1968. To return to Oz after a gap of 50 years was a deep, sometimes painful, sometimes joyous experience for Tobias, and shards from these reflections further illuminate the book, giving it a uniquely colourful perspective: the decade seen through the eyes of a spiritually alive child, in tune with the zeitgeist, then as ever.

Another Australian connection emerged in 2018 when co-editor Garry Trompf of the University of Sydney “called in” Tobias Churton’s paper on the “French Occult Revival” to feature in Routledge’s scholarly anthology, The Gnostic World, published in October 2018. 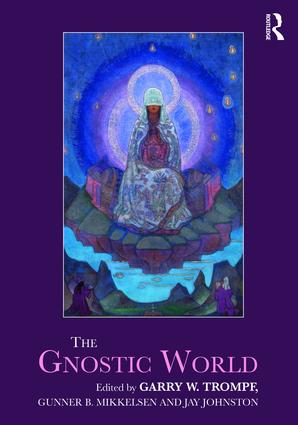 Edited by Garry W. Trompf, Gunner B. Mikkelsen and Jay Johnston, the 716 page The Gnostic World is, as the Routledge catalogue puts it: “an outstanding guide to Gnosticism, written by a distinguished international team of experts to explore Gnostic movements from the distant past until today. These themes are examined across sixty-seven chapters in a variety of contexts, from the ancient pre-Christian to the contemporary. The volume considers the intersection of Gnosticism with Jewish, Christian, Islamic and Indic practices and beliefs, and also with new religious movements, such as Theosophy, Scientology, Western Sufism, and the Nation of Islam.”

Another example of Tobias’s academic work in the field of esoteric spiritual movements came in September 2018 when Professor Gabriele Boccaccini (University of Michigan) invited Tobias to present a paper on “Enoch in Esoteric and Freemasonic Traditions” to the 10th Congress of The Enoch Seminar, an international conference of the most distinguished specialists in Enochic literature, held at a villa in Fiesole, overlooking the city of Florence in June 2019, in the spirit of Cosimo dei Medici’s Platonic Academy, held at the Villa Careggi, Fiesole during the Quattrocento. Papers focused on theological debate, literature, the history of arts, traditions in Judaism and Islam, the Book of Enoch’s reception history in Ethiopic, Armenian and Slavonic, the manuscript history, etc. All papers will be published in the Proceedings of the Conference by a major international publisher. 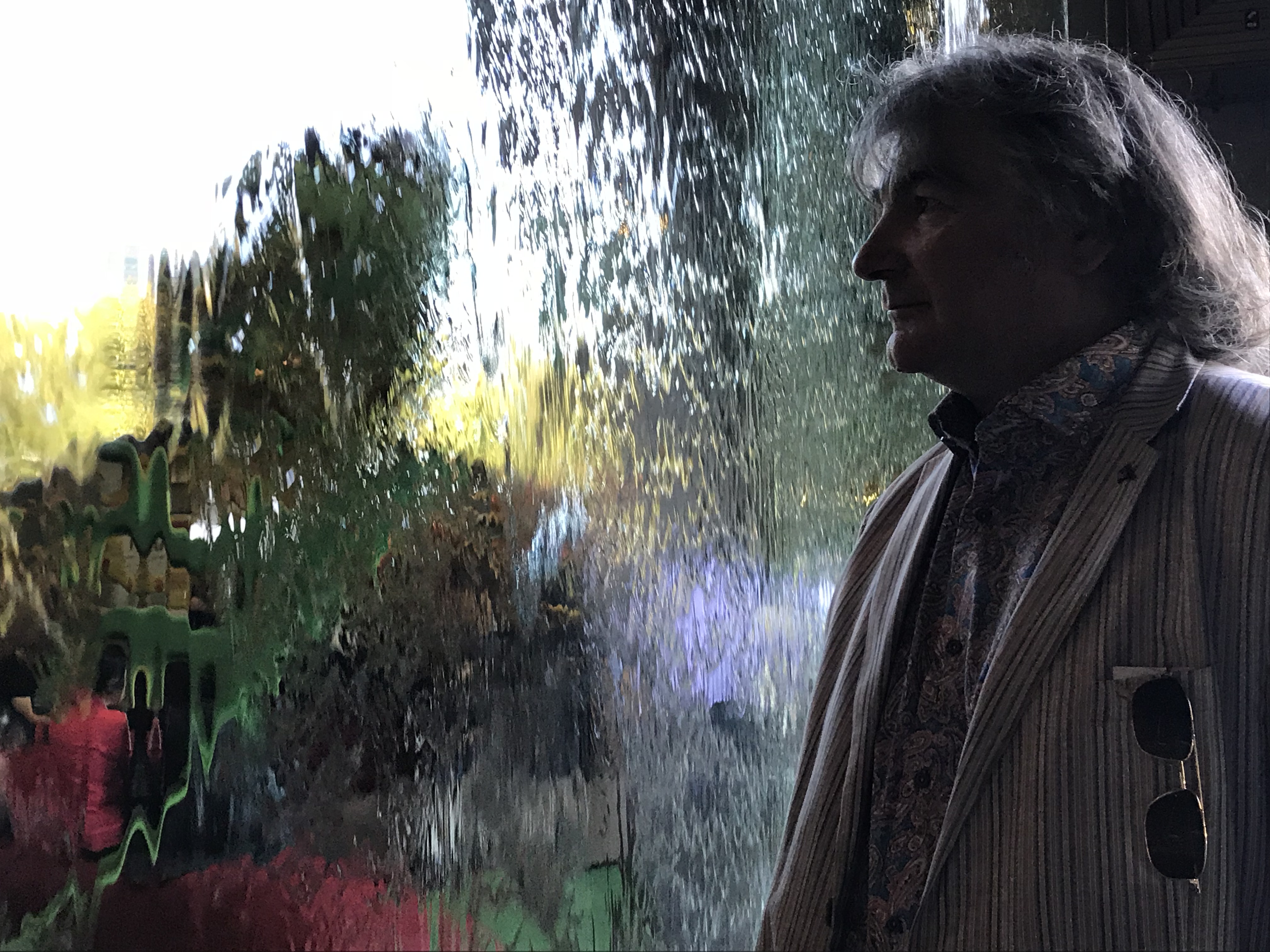 Tobias at the National Gallery of Victoria 50 years after his last visit . Photo © Mark Bennett 2018